A simple way to boost your ROI with your daily emails 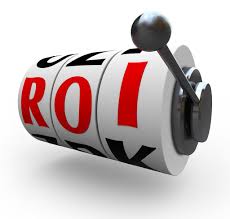 Have you thought about the ROI you get on your daily emails?  Probably not, because rarely do we think of the 100 emails we send 1-to-1 daily as “marketing” so we also don’t think of them in terms of the return on investment either.  But we should…in fact it might just be right up there with the most effective marketing your firm can do.

A colleague who specialises in building email marketing platform and all the associated elements that go with it told me that a single banner ad on on of his clients in-house email system was generating a 70% ROI – repeatedly.

This is not the Return-On-Investment from spending money on an email campaign where a particular product or service is attempting to be sold.  This is their ordinary, run-of-the-mill, daily one-to-one email that each person in the business uses to correspond with clients and suppliers on an individual basis.  That is, the emails that we send a hundred times a day during the ordinary course of business….and these clients are making money from them.

This result is quite extraordinary for two reasons.  Firstly, that is a good return on marketing spending, by anyone’s standards I would think. Secondly and more importantly, it is a stupendous return on what typically isn’t even thought of as marketing spending at all.  The daily email platform that we use to handle the daily communications is usually considered a pure cost, not a revenue generator, but clearly that doesn’t have to be the case.

Figuring out whether that could be the case for your firm is not easy though.  We struggle to find comparable data that helps in the decision-making to determine where best to spend those limited marketing dollars often enough, let alone in an area like this.

A bit of digging around to try and find some general or benchmark comparative stats for the ROI on different types of marketing initiatives proved to be difficult. Some data I did find suggested the following:

The conclusion was that email marketing was the undisputed champion of course, but it also appeared that this largely referred to “email marketing” as being promotional campaigns which is of course pure marketing.  Just to confuse things another report suggested that the best performing marketing medium was magazine advertising, with an ROI of 130%.  Online banner advertising generated an impressive 110% ROI, and traditional TV advertising varied but generally was found to fall within a range of 60-80% ROI.  There were some qualifying remarks regarding the magazine advertising which highlighted that while the return was very good, the audience and reach was limited.

It seemed that each of these pieces of research were quite limited in scope, if not perhaps using some simple or perhaps slanted research to support a preferred conclusion that helped sell a particular service.

One can conclude however that most forms of marketing will be effective to one extent or another – if executed well.  The problem with ROI as a measure is that it is a reasonably crude measure of success and therefore we perhaps do not draw the correct conclusion from the numbers.  It doesn’t indicate whether something was executed well or poorly, or whether it was just aimed at the wrong people or wrong place, or whether it was just a rubbish offer that nobody would ever be genuinely interested in.

Email marketing may well have the best ROI…but then it may not either.  If the message is poor, or the offer is underwhelming, is that a reflection on the medium chosen?  Of course not.  Apart from the marketing medium chosen, other critical elements in determining whether a particular initiative has met its revenue objectives will be the offer and the messaging.  Furthermore, one cannot ignore the impact of repetitive advertising the continued placement or presence on a particular medium will generally exponentially increase ROI.  Run a single TV ad and the ROI will probably be disastrous. Run it 1,000 times and the ROI will probably change significantly.  Unless it was just a rubbish offer, or was aimed at the wrong audience, etc, etc…

And finally, one of my (small’ish) concerns with focussing on ROI as a definitive measure is that it doesn’t accurately capture the broader impact of good marketing. Creating brand awareness and trust; generating word of mouth opportunities; breaking down barriers to doing business which thereby increase the conversion rates on other prospects….all of these types of things can be attributed in part to a good marketing campaign, but are not necessarily reflected in the ROI for a particular campaign or medium.

So looking at the ROI to determine which marketing medium to use can help, but it is a mistake to use it as an absolute guide in itself.

However, back to the 70% ROI on the 1-to-1 emailing…because that IS impressive for something which just considered a cost of doing business.  The ROI was created by including a banner advertisement for additional services the firm offered but which clients had not generally engaged the firm for.  Cross-selling additional services to existing clients in other words, but in a reasonably passive way.  Simply making sure that the additional services were highlighted in every single piece of correspondence sent from the firm on a daily basis resulted in measureable click throughs, measurable enquiries, and measureable additional services being put in place for those clients.

How easy would it be to get banners included in your branded email that highlight your services and product range, and have those going out as constant reminders thousands of times per month to clients and prospects?  I dare say most advisory firms wouldn’t have to get too many extra services or clients onboard from that to make the spend VERY worthwhile…It seems a very simple way to boost the ROI for your email system while going about your daily business.

It’s a No-Brainer: Get Better Email

Economist warns of impact of 1% rise in mortgage rates ow.ly/NooH30rzpGp

RT @MichaelKitces Why Most Retirees Will Never Draw Down Their Retirement Portfolio - kitc.es/2c89Vku